Merry Fake Christmas to us! We are heading to Utah later this week and realized that we would never be able to fit our gifts into our luggage. So last Saturday morning we celebrated our own little fake Christmas and opened our presents early. Brady was in rare form as the Grinch. He enjoyed tugging on bits of wrapping paper for exactly eighteen seconds. Then he insisted on sitting in his high chair, watching "Jay Jay the Jet Plane" and eating snacks for the remainder of our holiday morning. Therefore I will pretend that the picture above was actually taken during the festivities and not several weeks ago when Brady was feeling more jolly. This was the one and only present Brady assisted in unwrapping. He did manage one smile for the camera. Actually, he was "yelling" at me but every time the flash goes off he giggles for a split second. Next year we will open gifts later in the day because the poor guy is just not a morning person. Lately his ideal morning consists of snuggling with Mom or Dad on the couch, blanket in his left fist and his right thumb crammed into his mouth. He now points and grunts at the TV or will stare down the remote until we turn on his cartoons.

Brady was a bit confused because Mom and Dad were busy unwrapping presents of their own so the Grinch got to supervise from his perch while eating crackers in the buff. Argh, don't you hate it when Christmas interrupts your morning routine? Well, we had a great pre-Christmas and we can't wait until round two which might actually involve real snow. We are counting down the days until we see our families and friends because it just wouldn't feel like the holidays without them. Every year we plan to be on time and organized with all our Christmas activities. Then life happens and all of our early shopping and decorating plans fly out the window. This year, for the first time in our little family's history, we did it! We decorated the tree, ordered our cards, and had 90% of our Christmas shopping done by Thanksgiving weekend. This truly is a holiday miracle. Okay, "miracle" might be taking it a bit too far. It probably has a lot more to do with the fact that we are not juggling two careers and a new baby this year. Troy has been staying at home with Brady and always has things organized and ready to go.

I guess the real miracle is that we went to a craft store (gasp) and bought ribbon to put on the tree. This was one of my first trips to a craft store in all of my almost thirty years, which is truly shocking considering my Utah heritage. We wrapped a ribbon around our pitiful, $16 fake tree and I think it actually turned out okay. I even constructed the bow at the top of the tree from said ribbon. Not too shabby. 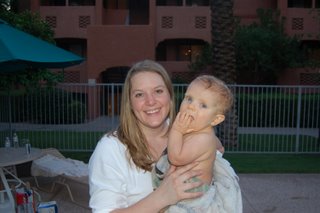 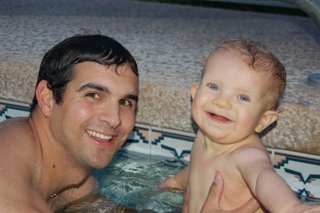 Hopefully we have figured out how to actually post to the blog we created. We are starting to feel settled in Phoenix and are trying to get in the holiday spirit. It just doesn't feel like Thanksgiving is around the corner when it is 85 degrees and sunny every day. Today was the first day the air conditioner didn't kick on and it remains to be seen if we will ever use the furnace. Wait, do we have a furnace?
We recently emerged from the dark ages and bought a digital camera. Here are some pictures of the three of us at the hotel pool while on our house hunting trip to Phoenix in September.

On the Blogging Bandwagon

Welcome to the Farnsworth family blog. We thought this would be a great way to keep in touch with friends and family after moving out of Utah once again. We have set up shop in Phoenix and are enjoying the weather (for now, that is) and desert scenery.
Posted by Kajsa Farnsworth at Friday, November 03, 2006 3 comments: 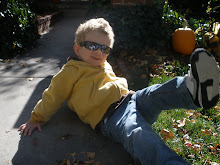